How Do Robots Support Automation in the Automotive Industry? 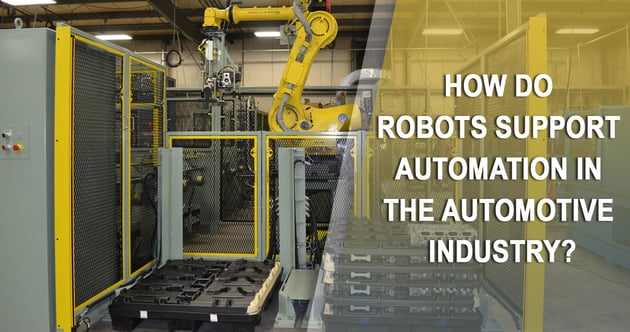 When it comes to leveraging robotic applications to enhance automated operations, the automotive industry is arguably the most advanced and mature in the field. And because accessibility to smart robotic applications and programming is greater than ever before, automotive production and assembly lines are now achieving the highest levels of quality and efficiency. On the assembly side alone, you’re apt to see one or two workers overseeing upwards of 80 functioning robots.

The automotive industry has been using robots in their assembly lines for more than 50 years.

“For more than 50 years, the automotive industry has been using robots in their assembly lines for a variety of manufacturing processes,” explains Robotics Business Review. “Today, automakers are exploring the use of robotics in even more processes. Robots are more efficient, accurate, flexible, and dependable on these production lines. This technology has allowed the automotive industry to remain one of the most automated supply chains globally, and one of the largest users of robots.”

Given the complex nature of the entire automotive manufacturing industry, plus its evolving demand for efficiency and cost-effectiveness, embracing smart robotic solutions has become absolutely integral. From body and paint shop functions to powertrain machining and assembly applications—including everything in between—here are some of the most prevalent and valuable ways robots support automation in the automotive industry.

The majority of press shop functions in the automotive industry are automated nowadays. With the support of robotics systems, these lines have become even more precise and efficient. Perhaps most notably, robots are filling a critical role in ensuring safe transfers between press steps.

“Over the past few years, there has been an increase in the adoption of metal forming and press tending robots, owing to their ability to work under extreme conditions and give relatively better results than automated equipment used for metal forming and press tending applications,” indicates a Business Wire article highlighting the upward trend in market growth for these types of robotics systems.

“Players in the market have introduced robots that can be easily synchronized with industrial stamping presses and are increasingly being adopted for material handling processes that require parts to be tilted, rotated, and flipped.”

The body shop is another juncture within the automotive manufacturing process where operations are just about entirely automated, and welding is perhaps the most vital task for robots in terms of supporting automation in this industry. Enabling once unheard-of levels of speed and quality, robotic welding is one of the oldest robotic applications in the automotive manufacturing sector. It dates back to the late 1960s, when General Motors (GM) implemented UNIMATE, the first industrial robot, to perform spot welding.

The prevalence of robotic welders can be attributed, in large part, to their capacity for increased safety. Integrating robots into the automation of welding processes alleviates the need for exposing humans to this type of hazardous work, including everything from dangerous chemicals and fumes to extreme heat and noise, as well as the stress of repetitive twisting and lifting motions.

In the automotive paint shop, we once again see full automation capabilities, as this task is no longer being performed by humans. Robots support this automation with programming that allows them to follow a consistent path to cover large areas while minimizing waste. They also prove advantageous in the spraying of other related substances like primers, sealants and adhesives.

As Robotics Online portrays them, “Industrial paint robots are relentless perfectionists, control freaks if you will, that are bound and determined to shine above the rest. These industrial workhorses produce virtually flawless paint finishes with superhuman consistency and throughput.”

Robots also support greater flexibility in terms of an automated painting process, enabling the shorter runs and quick changeovers that have become prevalent in automotive manufacturing. This is important for accommodating the demands of color changes and variety.

It’s true that there’s still a great deal of manual labor involved in the assembly phase of automotive production. In truth, some applications simply don’t lend themselves to automation. Consider, for example, the more complex motion involved in hanging a door, or the confined nature of loading an instrument panel around a steering column.

Even so, automation is becoming more utilized here. Industrial robots are leveraged to install tires and wheels, and larger collaborative robots act as smart lift assists. Whereas the job of attaching a door to the frame might have once required two human workers, this task can now be completed by one operator who hand-guides the part as it is retrieved by a robot and assembled.

You’re bound to see far less workers and many more robots on the powertrain assembly line than on the car assembly line. This is partly because the work performed on an engine happens in the open area of a belt, whereas the tasks associated with assembling the vehicle occur in a more confined space.

On the powertrain side of automotive production, automation is rampant in machine tending, machining and assembly. The deployment of robotics has become a critical component of this automation, with robots typically handling all aspects of machining and many of the assembly tasks for elements like engines and transmissions.

Given the dangers involved in handling components during machining, this task is no longer managed by humans. Automation has become the primary source of this work, with robots greatly impacting the effort. Robots can also tend machines like CNCs, which saves manufacturers on time and money.

In the supplier world, there’s just as much integration of robotics systems and automation as in the OEM arena. The lower the tier level, the more automation you’re likely to see, as the profit margin on those parts are reduced at each tier. Robots are supporting this automation in much the same way they are doing so at the OEM factories, achieving valuable outcomes in the way of:

Ultimately, the automotive manufacturing industry has become the leader in robotics integration, with technologies and applications that the rest of the manufacturing world look to for guidance.

While robots have become more accessible and easier to deploy than ever before, it’s essential to work with an experienced integration partner to implement an expertly designed system that fully supports your company’s business goals.