How Automation Became the Future of Manufacturing 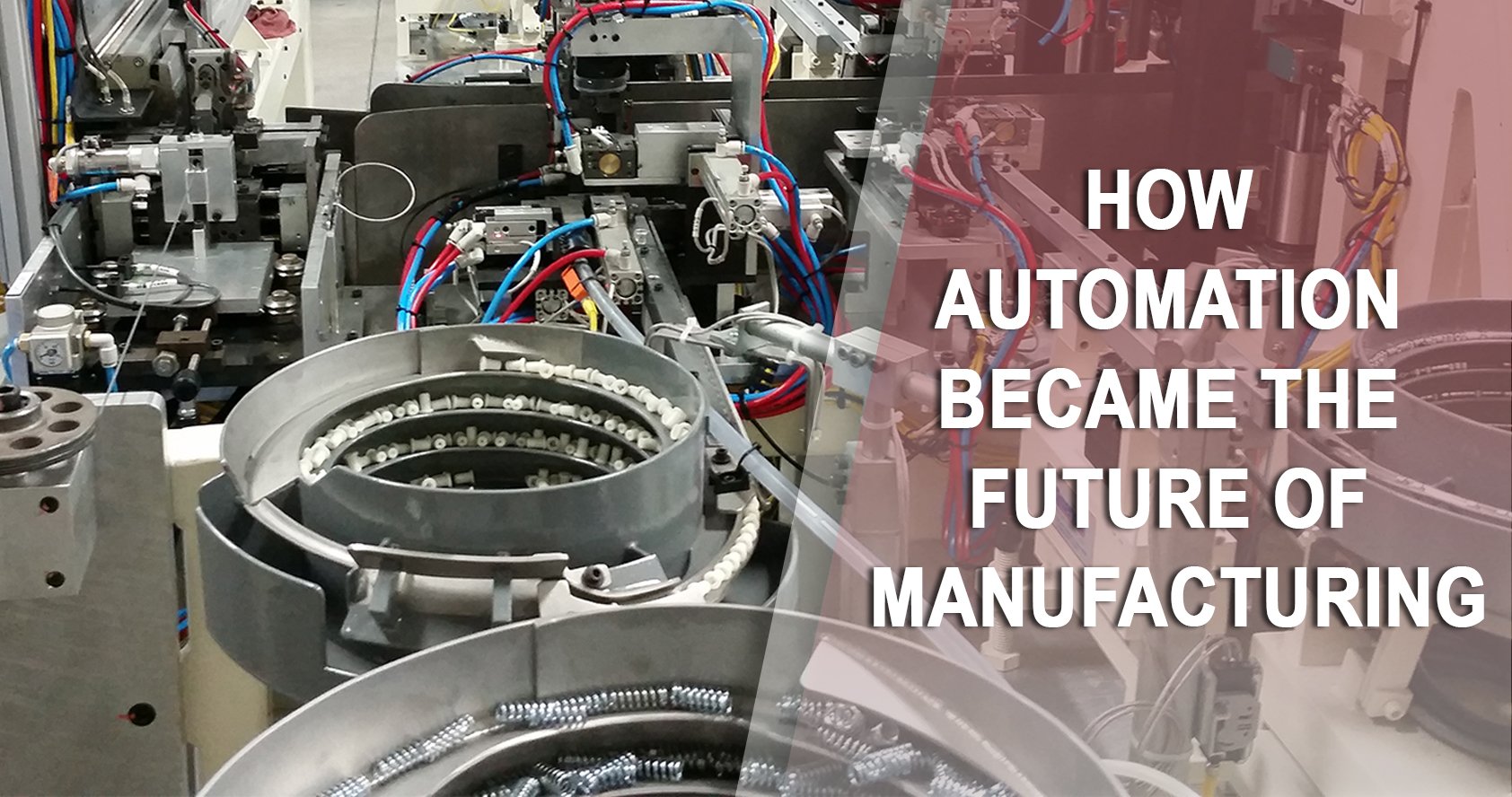 When Hanna-Barbera first brought The Jetsons to American television screens in the early 1960s, their characterizations of a futuristic world were mere projections of the imagination. In many ways, though, this series foretold some of our society’s most technologically driven advancements. And while the manufacturing industry isn’t quite the snapshot of automation portrayed by the likes of Spacely Sprockets, it isn’t all too far-fetched from this depiction of automation either.

In fact, automation is driving the future of manufacturing in ways we might not have even thought possible just a few short decades ago. From machine-operated production lines to multi-function collaborative robots, there’s been major transformation across the industry, compelled largely by the undeniable advantages and forward movement of automation.

So, how did we get here and, more importantly, where are we headed next? In this article, we’re diving into the past, present and future of manufacturing automation, extending some valuable industry insights to give you a more informed perspective on the trends and technologies that are bound to affect your business in one way or another.

The United States initially began to see automation hit the manufacturing scene in the mid 1950s. The very first industrial robot was patented by George Devol in 1954, with a prototype capable of moving objects a distance of 12 feet. Unimation, the company he built to manufacture the robot, delivered this “universal automation” product (named UNIMATE) in the early 60s, and it was quickly adopted by General Motors for use in their New Jersey manufacturing facility.

Just a few short years later, an electric six-axis articulated robot was designed by Victor Scheinman at Stanford University. The invention opened doors for the manufacturing industry, enabling companies to leverage the technology for various assembly tasks, and it was eventually sold to Unimation for development.

It wasn’t until the 70s that hydraulic robots emerged, making use of hydraulic fluid to propel automated movement. Then, in the latter part of the decade, we began to see all-electric micro-processor controlled robots.

It was in the early 80s that FANUC built its very first robot. The venture started out as a joint one with General Motors, who wanted to deploy the painting robots they had developed in tech centers. FANUC was operating in the field of computer numerical control, or the application of coding to control mechanical movements. In 1982, GMF Robotics Corporation was born, and today, FANUC America is the largest maker of industrial robots in North America.

It’s no wonder why manufacturing automation or, more specifically, robotics were so much more quickly embraced by the automotive industry than others in the arena. For starters, these companies were the largest manufacturers of their time. Additionally, pressure was felt from Japanese automotive companies moving manufacturing to the US with lower labor rates and better quality. Historically, the automotive industry has been ripe for automation, given its characteristic patterns of high demand, repeatability, and predictability.

Looking back on the beginnings of industrial automation, we can see the transition from where we’ve been to where we are now. Just look at the shift in affordability.

In the 1990s, there was certainly still a perception—and, in many cases, a definite reality—that robotics were simply too expensive to be practical. But over the last several decades, price points have dropped dramatically. In fact, you could pay the same price for a manufacturing robot today as you might have in 2000. And given the significance of inflation, that’s a huge reduction in financial investment.

As a result, today’s landscape shows a 1:10 ratio of robots to workers in the automotive industry. In general industry sectors, that ratio looks more like 1:100. And it continues to evolve.

With the onset of challenges and opportunities presented by modern issues like Covid-19, we’re anticipating even greater acceleration in terms of companies integrating manufacturing automation and robotics.In the short term, there are obviously some slow-downs and hang-ups to work through. But because of the nature of this pandemic, the advantages of automation are becoming even clearer. Six months from now (or whenever there’s a vaccine or more stable grip on managing the disease), things are bound to take off again.

Many companies, for instance, are sitting on unused spending budgets from 2020 that can be reinvested into the future growth and profitability of the business (i.e., lucrative automation moves). And in other cases, it’s much like how organizations approached the Great Recession at the beginning of the 21st Century. Whereas they were initially applying band-aid tactics to keep equipment viable while sales and revenue plummeted, the automation segment completely exploded again in 2010 when the nation began to emerge from the hardship. That’s how our current outlook is poised to unfold as well.

Forecasts for the Future of Manufacturing

So here we are, at the precipice of one era in manufacturing automation—and staring down the next. If you’re wondering how that’s likely to look, following are a few viable predictions.

First and foremost, we’re likely to continue seeing fewer people performing repetitive and non-skilled tasks in manufacturing operations. With the capacity for robots to take over these types of functions, as well as the ROI of such a transition, manufacturers will have the freedom to migrate their human workers to less tedious positions. In the same vein, we’ll continue to see people removed from harsh and dangerous working environments, where robots can easily mitigate the risks of hazardous conditions.

There’s also a case to be made for the notion that we’re bound to see a more technically skilled workforce emerge. After all, someone has to maintain all of this automation. And we’re already seeing it manifest within the school systems, including STEM programs that promote learning in these areas. It’s not far-fetched to conclude that the ability to program automated systems, with or without a college degree, will be a skilled labor in very high demand.

Finally, there’s the changing public perception of automation on the horizon. The common judgement used to be that automation takes jobs away from the American workforce. Now, we’re starting to see a shift in that mindset. Looking ahead, we’re likely to see that needle move even farther along. Manufacturing automation has the potential to create both vast opportunities for employment and a greater reliance on our own domestic resources.

In the end, the future of manufacturing may end up looking even more advanced than we can conceptualize right now. Regardless, automation is the driving force behind it all. And as it continues to pave the way forward, manufacturers across the industry should stay informed on how it can support their business to the fullest.

Learn more about how automation empowers manufacturers in our free whitepaper, 7 Ways Automation Makes Manufacturers More Competitive. Click below to download it now.